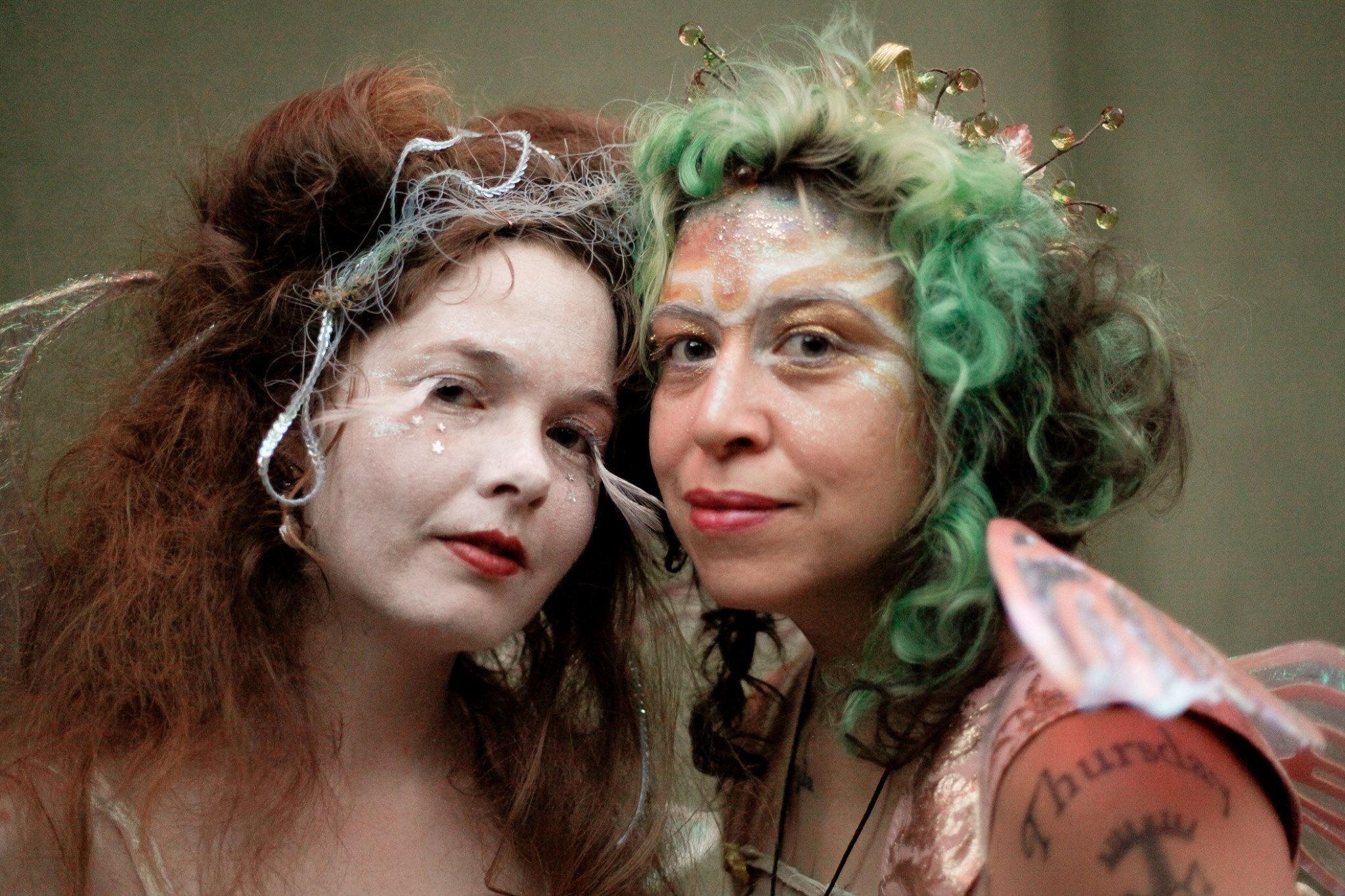 “Entertaining for the 2nd year running, Portland’s forever original and FANTASTICALICALLY COLOURFUL dance troupe Bacchus’ Boogiers dancing NON-STOP EVERY MINUTE to each of the bands performing…” OH YEAH! Bacchus’ Boogiers lay down their psychedelic, uniting and liberating interpretive grooves — pushing rock ‘n roll back into sublime interaction vs. performance-observation.  Portland Psych Fest is organized by Eric Rubalcava.  Eric is a Leo in his own power: warm, generous, positive.  It’s a pleasure working with him, because mi casa es tu casa all around.  He trusts the troupe and supports us.  He knows how important it is for performers to be have fun and feel comfortable, so Psych Fest is our dream playground.  We can freely express ourselves.

This year we decided to make faerie wings for one of the nights.  I always have to shoot for achieving the ultimate dream my first go-round, so I researched how to make iridescent wings and spent weeks making them, moving slowly through each step in an effort to avoid making mistakes.

My initial frame I bent from wire hangers, which turned out to be far too heavy.  I started over with galvanized wire.  I meticulously wrapped the frame in white floral tape, then realized I didn’t even need to make a frame, but definitely should have veins.  I wrapped little pieces of wire in more floral tape, bending them as symmetrically as I could.  The white floral tape and iridescent cellophane were the most difficult materials to track down.  I ended up finding the floral tape at Scrap, a thrifty art store that gets its stock donated.  I found one sheet of iridescent cellophane there, and after checking at 4 or 5 local stores, had to order the rest from online.  Between two sheets of cellophane I sandwiched a sheet of thin clear vinyl.  After I melted it all together, which was its own special adventure, I realized I really should have thought about how to connect both of my wings to each other.  I ended up making a rectangular frame from the thicker hanger wire and peeling back the cellophane/vinyl situation to attach the frame by wrapping it with jewelry wire.  A last-minute trip to Fabric Depot provided a thick 2 yard long satin ribbon, and not enough clear elastic.  Ehva and I tied the satin ribbon in a fat bow around the rectangular frame and quickly stitched the height together around the perimeter.  Ehva made another Fabric Depot run to acquire more elastic the day of Psych Fest!

For my dress I used another dress as the pattern and sewed the iridescent (plastic) fabric together with Ehva’s machine, doing two layers of the zig-zag stitch.  I’d found a floofy slip a couple days prior.

I’ve been really drawn to iridescent/luminescence/holographic/opalescence for some time now.  To me it represents liminal space.  It makes me think about how we’re moving out of the age of Pisces into the age of Aquarius.  As the human race we’re currently bridging and straddling many dualities.  The generation just younger than me seems to be tuning into a mystically harsh androgyny, a pastel neon transparency.  Poetically and practically, we are embracing fantasy to inform the decisions we are needing to make about how we’re going to restructure our world and create the new paradigm.  We are immersing ourselves in the in-between.  We are creating and finding magic where disillusionment has long reigned, refusing the broken dis-empowerment of our parents’ cynical acquiescence to the now abruptly passé power structures.

I’m currently in my own personal in-between, at 29, a major cusp of sorts.  I’ve chosen to let my childhood passions bubble up through the decades of distractions and mutations.  I believe in the necessity of re-enchantment.  I wasn’t surprised, but my gut feelings were confirmed by the overwhelmingly positive reception of the first night’s outfit. 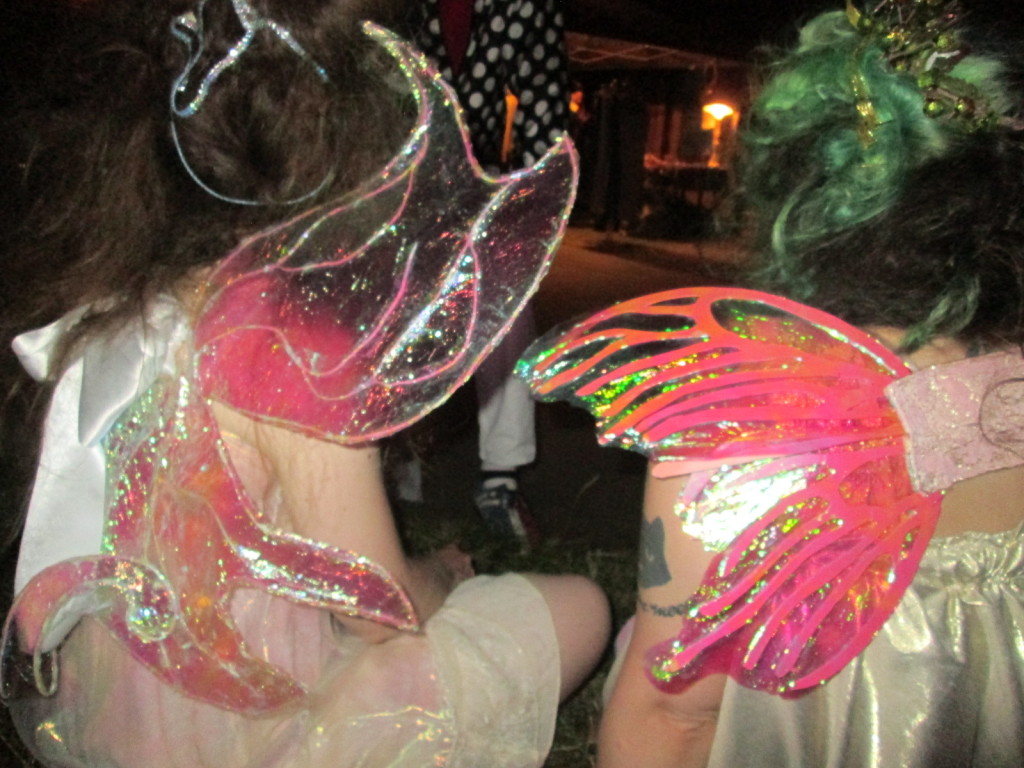 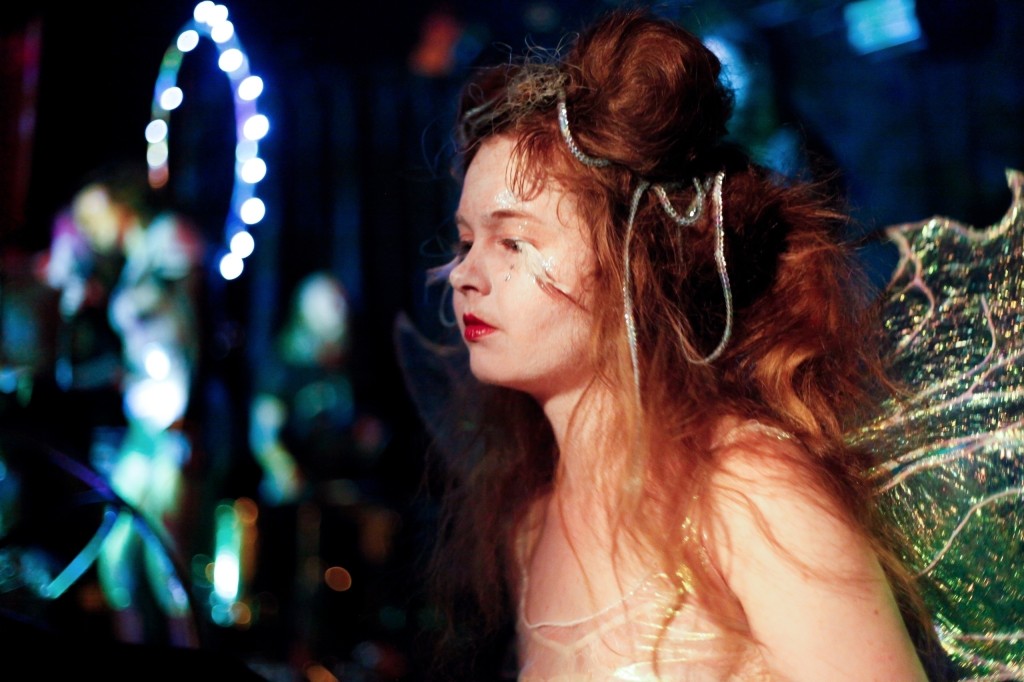 One man was enchanted enough by our glitter that he asked if we had any on hand.  We frolicked out-of-doors and he pointed to the constellations of beauty spots on his face and asked for a shooting-star trail reaching down his cheekbone.  I gladly complied with the little bottle of iridescence in my hand.  He was Jackson Boone, whom we’d performed for the previous year.  Later in the eve, a flutter of happening to do with balloons being inflated: big clear round ones, a rainbow, a dolphin!  Jackson Boone has a vision: a watery, whimsical atmosphere, deliciously layered compositions, calling in the faeries — starlit and oceanic!

The second night we imagined getting ready for a freaky happening in Golden Gate Park.  I gathered inspiration from my ancestors: The Merry Pranksters.  With the help of make-up virtuoso and hair sculptor extraordinaire Ehva Thursday, we painted swirls on my face with black-light paint.  I finally got together the right combination of clothes, some flowery layered cosmic outlaw, whose belt of bullets was a belt of bells. 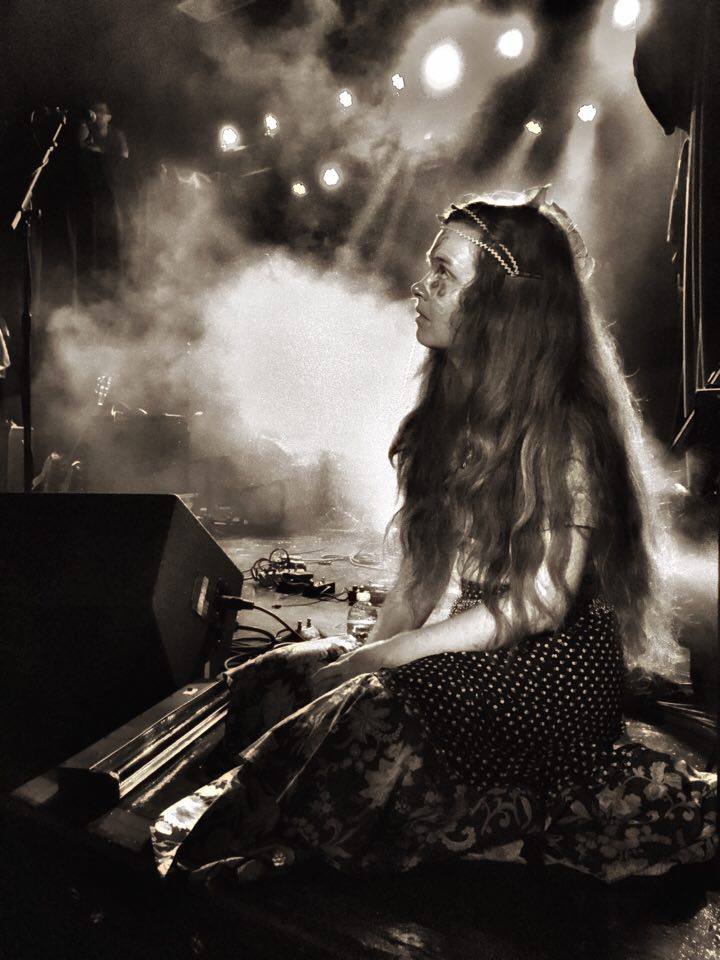 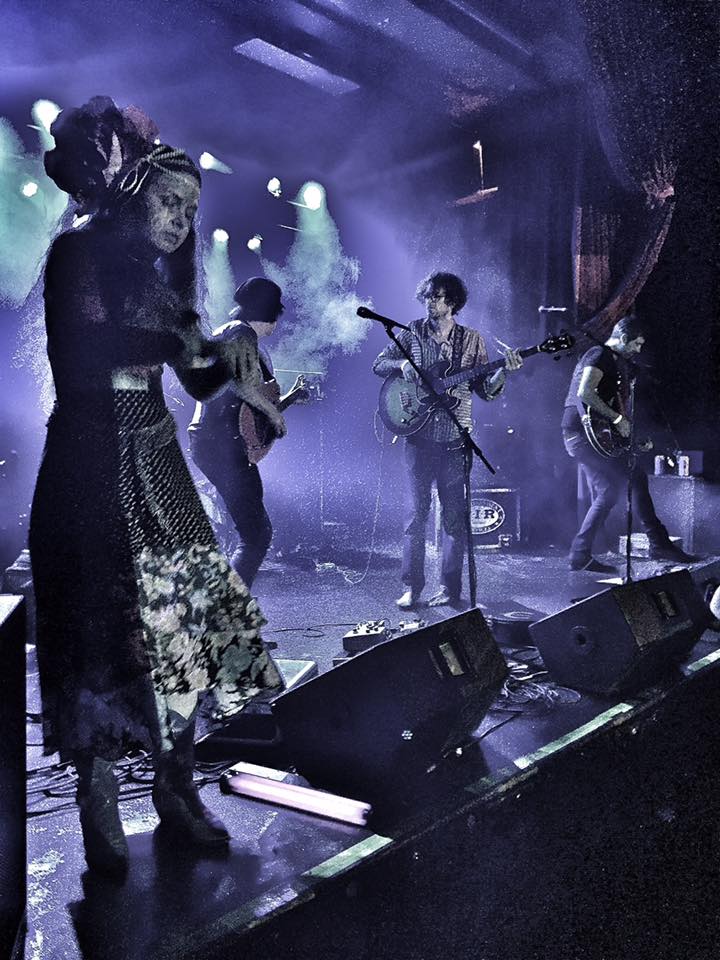 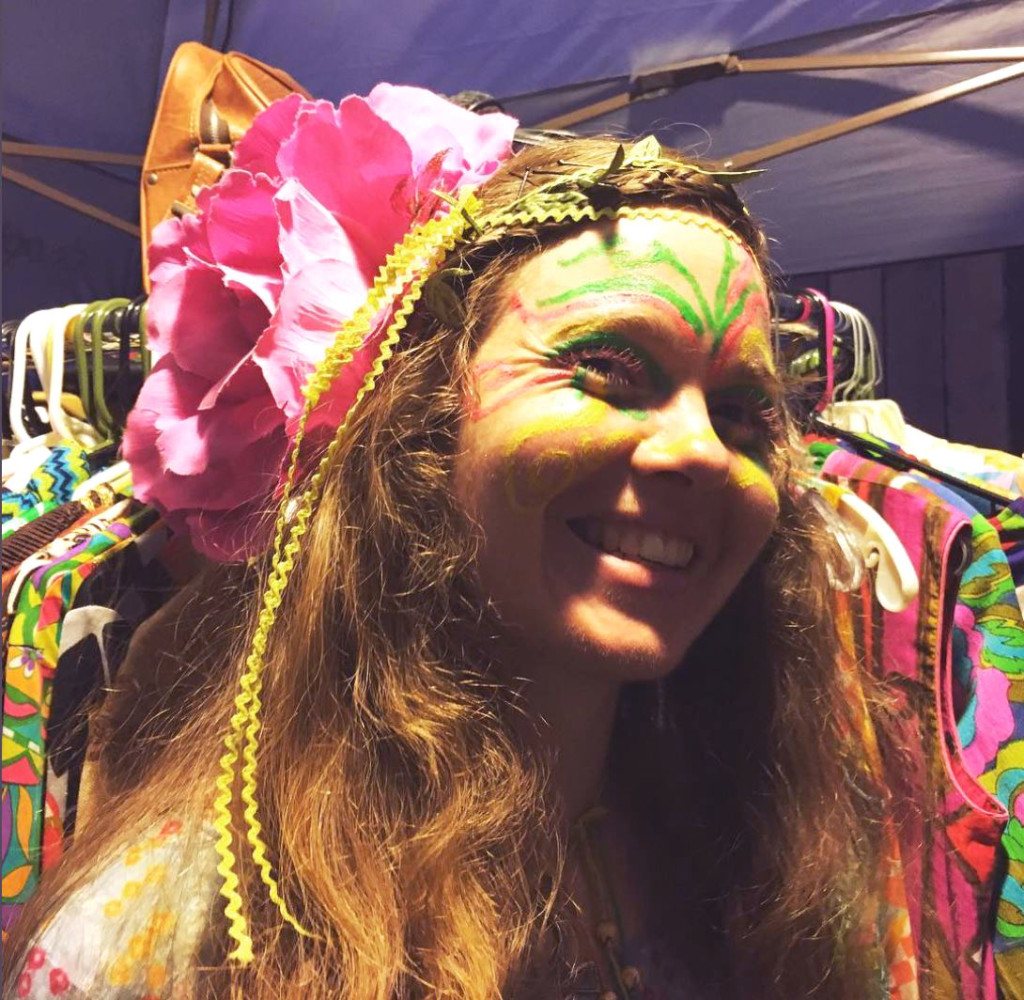 This night’s biggest and strangest gift came with the guest-star, Helios Creed, who introduced himself to Ehva and me by his mom-given name backstage.  And whom we quickly hauled outta the pizza couch pit with illustrious promises of a portal to another time and place.  He and his friend followed us into the night of the patio, with its two triangles of nature, which I referred to as “fields.”  I made them lie down and look up through the bamboo bush at the stars.  Helios ardently tells me that stars twinkle, and that that is a planet.  Jupiter.  He learns we’re dancers.  He talks with reverence and about how dancing making the music better, makes an earnest promise that there will only be cool lights, nothing too bright, nothing hot.
We slip away and skip off to get ourselves in the zone for Spindrift’s set, only to be informed that they don’t want dancers on-stage.  Confusion explodes.  Denied from the grand finale of Thee Psychedelic Festival!  It must be a mistake, since we’ve had affirmative exchanges with both KP and Helios…  Our offended bewilderment sends the supportive messenger back onstage to re-inquire.  He returns with the identical information.  I am CRUSHED.  I notice myself wanting to remove myself and resolve to do the opposite.  I very consciously decide to remain open to possibility.  Ehva wanders back to me with news of Helios’ proclamation to refuse to play unless we dance.  I feel heart-broken enough to doubt I can conjure the enthusiasm or inspiration, if that should play out to be the case.  I focus on finding myself in the music and twirling through the crowd, shedding off any tentacles of pity.  And then Helios is invited on-stage and he does not revolt or demand, instead asking into the microphone, “I’ve got to have those dancing girls up here!  Where are they, I know you’re out there somewhere dancing girls.”  Thus, a dream deferred is unexpectedly redeemed!  I dance for Helios’ sounds, embody and transcend simultaneously, and let the sickly sweetness of my sadness disintegrate into the Summery night.  Ehva is at my side, and Marc bops up stage-left after a different dancing girl dissolves back down into the crowd.
Bacchus reverberates, chuckling with the shadowy cryptic fates at his sides, and the boogiers choogle on!