I go to the woods when I need the most neutral and true reflection of myself.  A few months ago, I was walking there and saw three dung beetles!  The first one was dying, and I righted it with a twig, all the while thinking about nature taking its due course despite my involvement.  The second was alive and the third was dead.
I thought about the cycle of birth, life, and death.  It comes to us literally and figuratively, every small story we conceptualize has its arch of potential magnificience.  I’ve been interested in Egyptian mythology since I can remember, and seeing 3 dung beetles in the woods of outer-Berlin sang of significance.  The scarab is a sacred animal, depicted in ancient art as a symbol of the cycle of life, microcosmed in the metaphor of pushing it’s precious ball of dung, which contains its nourishment and its promise of legacy, up hills of sand.  A laborious dedication to its inner knowledge, exercising this seemingly endless task… and coming upon a day during which hundreds of tiny scarab babies stream out of nowhere.  Scarab was seen as a self-creator, rising from refuse, fully conceptualized.  Its closed wings represent the disciple, and its journey towards the day it unfolds its wings and takes off towards the sun, in flight, makes it a symbol of resurrection.

In art, the scarab is often depicted holding a sun disk, symbolising the new sun that rises each day.  In my painting, I wanted the purest heavenly light to obscure concrete reality, which is designed specifically for each of us, and often intertwined with our outward appearance and presentation.  Scarab was also used as a heart protector.  In the final stage of the journey, we are judged.  Judged by ourselves, the world, powers and forces we have no part of.  In the Book of the Dead, a person asks his heart not to testify against himself during the weighing of the heart ceremony.  It appears at a crossroads, and fit well with the tarot cards I’d been sitting on. 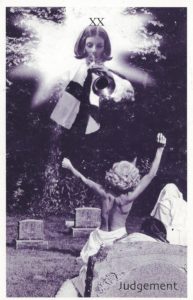 Two massive points of transformation, two promises of the road going on, a pat on the back from some kind of faith in destiny.  In the jungle of my outerworld, thick and green, a stream of clarity flows through, gently washing over my heart.  I bask in the light that the scarab brings as it embraces its unknown capacity to fly, lifting off from its earthly trudgery and the miracle of its own mundanity into its future.  I have become both soft and strong, calling divinity into my heart and releasing it again and again, blindly hoping I’ve grasped the test against which I am being weighed against.  Praying that I awaken into a self I’ve been incubating subconsciously, rising to the greater purpose of fate and, with that, an even greater faith in the cycles of life.

Even with one foot of humanness, I am obscured by a light greater than myself, and nearly recede into an objectification or illusory remnant, a rejected Magdelena in my own pastellic dreamscape, catalysing petrification with my lush imagination?