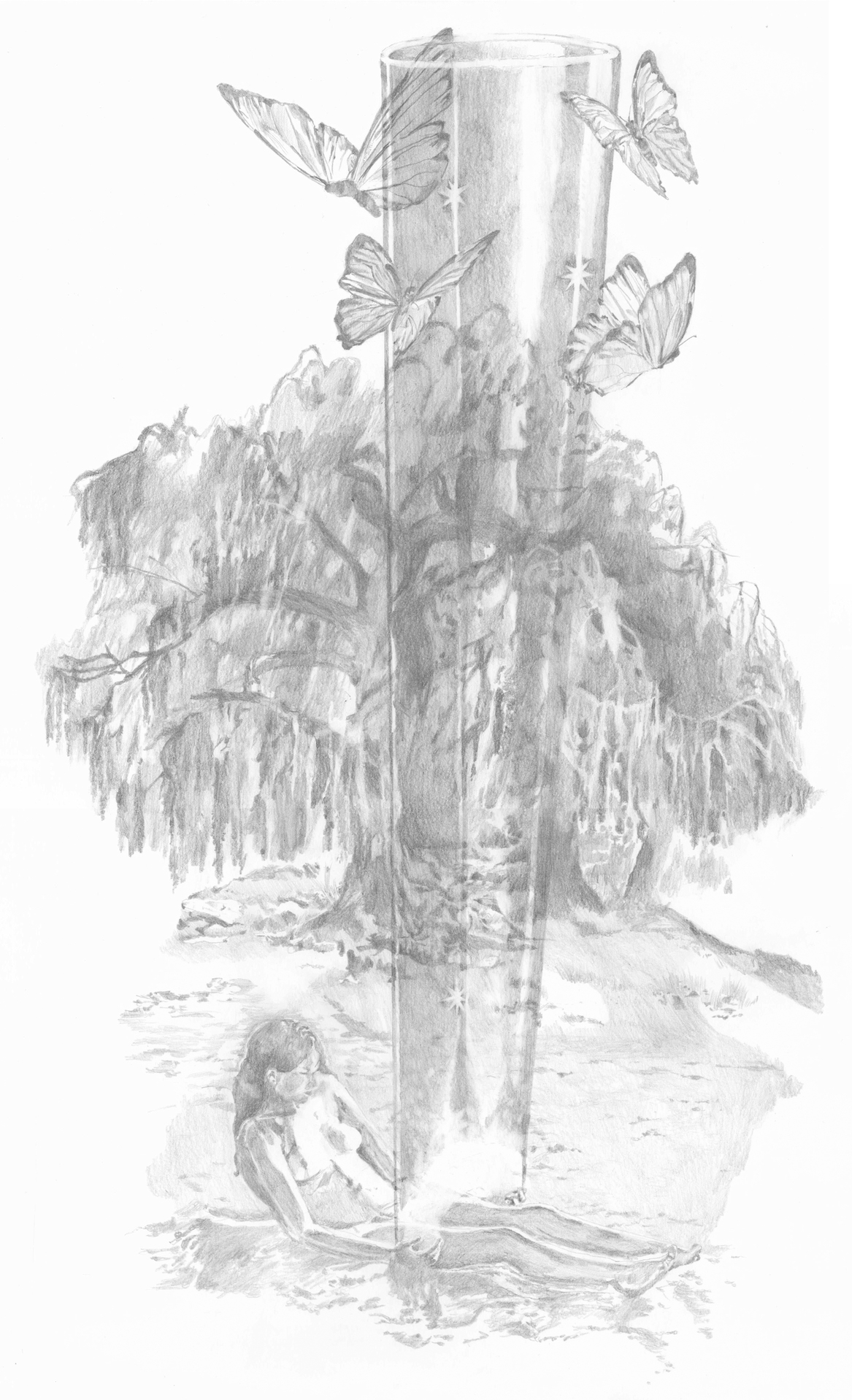 This vision came to me over time. A photo of Laurie Bird during the filming of Two Lane Blacktop had been rolling about in my archives of inspirational images for who knows how long. My memory kept it around the front of my mind because of the unusual position of her lifting herself up out of shallow waters by her stomach muscles. It seemed so purposeful, internal, and receptive. A few years ago in a bout of existential hardship I started sketching a stream of consciousness collage of comforting elements, highlighting my past rabbit companions as angelic fur butts and the figure made its first appearance symbolizing my earthly incarnation trying to get into contact with my passed animal companions. A fully realized vision of elements pieced itself together this Spring.

She channels via the bridge of light between her hands, lifting herself from the shallow pool of water while being simultaneously lifted by her openess. The pool collects and stirs beneath a willow tree, both supple and strong. The willow is a feminine tree that holds space at the water’s edge and helps transmutes the memories and grief we release. When we choose to release something, it is this first step of creating space for something else to come in, something we have a hand in increasingly consciously inviting. The flexibility of the willow teaches us not resist life’s course, it supports us in feeling all of our feelings and moving with life. Water is an additional symbol of intuition and the feminine, holding the overwhelming realities of vastness and impartialness. I imagine the water to be a river’s edge, slightly muddy, and the pulling oneself from this light bog of emotional complexity a slow and freeing process, engaging the core strengths of our spirit. The palms lay open, both receptive and guiding, “flow through here,” no arm strength is used, other than the physical center we surrender our raw will to something greater which is now allowed to flow. This is the channel to our higher selves, to god, to the holiness of surrender and faith. The channel is a glass tube, refracting light and tunneling from this intuitive act of surrender and intention to the something greater, something above, something existing beyond the capacities of our imagination.
What creature is better than the butterfly to illustrate what also Rudolf Steiner expounds upon as, “…it is spiritualized matter that we find to the greatest degree in the butterfly. Because a butterfly always remains in the sphere of sun existence, it only takes to itself earthly matter — naturally I am still speaking figuratively — as though in the form of the finest dust. It also gets its nourishment from earthly substances that have been worked through by the sun. It unites with its own being only what is sun-imbued; and it takes from earthly substance only what is finest, and works on it until it is entirely spiritualized. When we look at a butterfly’s wing we actually have before us earthly matter in its most spiritualized form. Through the fact that the physical substance of the butterfly’s wing is imbued with color, it is the most spiritualized of all earthly substances.” (read more of Rudolf Steiner’s understandings of the butterfly in Harmony of the Creative Word)
Where the butterflies play, as barely-still earthly creatures, almost more creatures of light and sun, this is where pure inspiration originates. They flutter in reflection of the cosmos. We are entranced by butterflies, desperate for them to notice us, grace us with their attention. It reminds our deepest subconscious of what attracted us to the achingly supreme beauty of a new Earthly existence.

Our chosen substances given over for transmutation are played with by higher beings, interpreted in a spiritualized realm we can only truly access through surrender and faith.